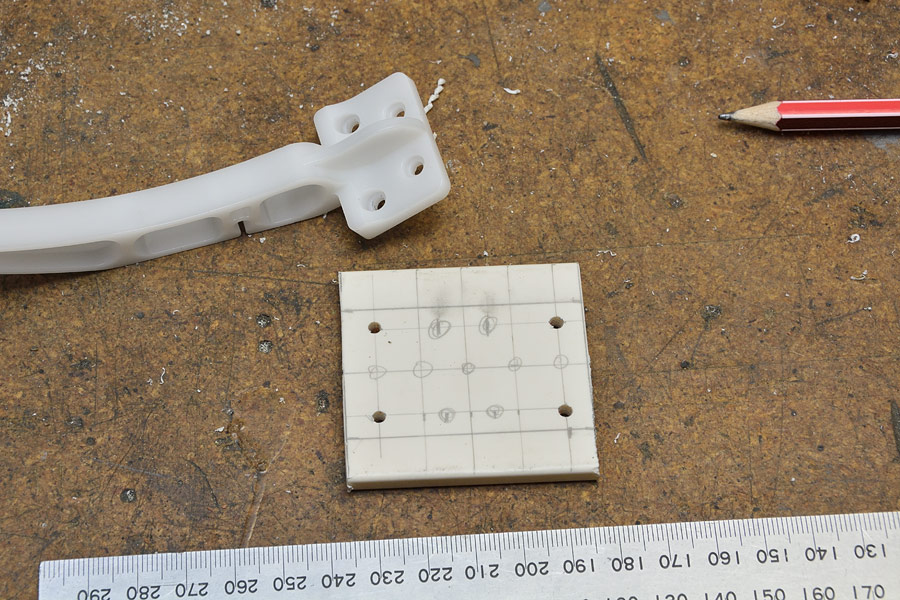 Shifting a point of failure to a cheap and easy to replace item is probably not a bad thing, but a weak point was also identified in that the 8mm aluminium spacers beneath the Aimdroix arms were also shearing off with any unexpected rough landings. Aimdroix arms are 6mm shorter in height (at root) than the standard plastic DJI arms, so spacers are used so that the Wookong-M IMU (Inertial Management Unit) can be centrally located in-between the boards. After considering various alternative schemes, it was decided to browse through Bunnings for some material that might turn an idea into reality.   This was found: The term “nominal” is used, because is has a non-uniform profile like this: Being PVC, this will tend to absorb some of the shock that was being transmitted through to the frame.

A nominal length was chosen, 53mm, (providing a leg offset of 40mm) and using a leg as a template for mounting holes, was marked up and drilled accordingly: Additional holes were also drilled out, to reduce weight (not that these are particularly heavy to begin with) and to provide some flex and shock absorption. The sides were uniformly trimmed off.

After a spray of matt black paint, we end up with something like this: These landing gear mounts flex and absorb shock, and have proven to work extremely well.   No more broken legs! In fact, one leg that has broken twice before (and Superglued back together), has not broken a third time.
(Noting that Superglue has it’s limitations.)

Another simple modification to reduce some weight was to trim the legs themselves: The weight saved by trimming the excess leg and mounting tab length on four legs is: Since this landing gear modification, 15 flights have been performed, and not one incident of landing gear failure… even with Superglued legs.

The conclusion is, these PVC landing leg mounts absorb shock, and in positioning the legs 80mm wider apart than stock, have reduced the chance of tipping over on a rough landing and/or on an uneven surface.

In fact, it hasn’t tipped over once, whereas before the mod, was relatively easy to tip over.