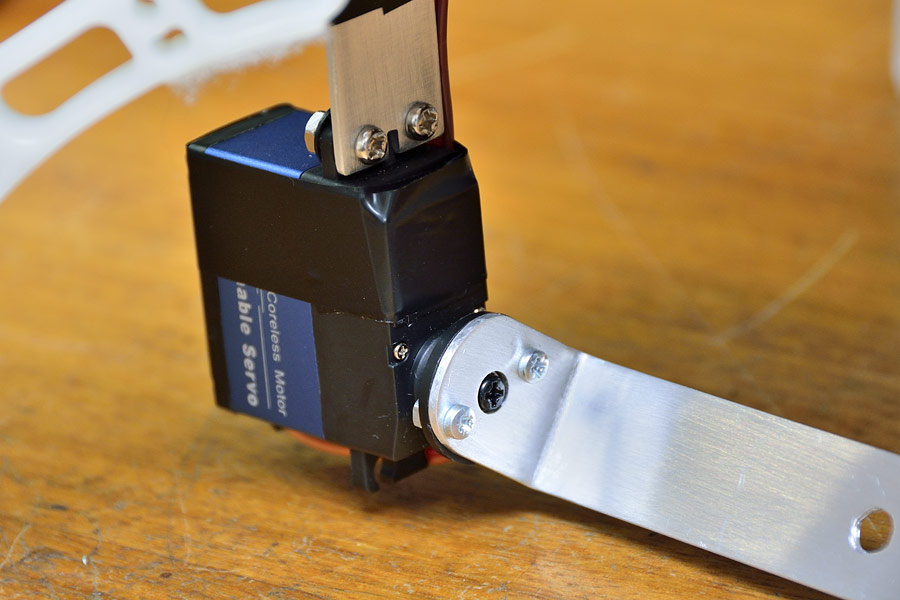 This is a home-brew tilt-stabilised light-weight camera mount, designed for a mirrorless class (400-500g) camera. Not having the weight budget for it anyway, no attempt at roll stabilisation has been made, nor is it required in this (stills) camera platform, as the flight controller will maintain a level attitude whilst hovering.

During the design phase of this quad multirotor, long before this mount was constructed, various MR configurations and mounting points were considered.   The horizontal line is the image plane of camera. The widest angle of the lens was taken into consideration, 100° in this case, so as to avoid seeing the landing gear.

Central to this mount is a heavy-duty servo, and eliminates the need for gearing: Servo is being run towards it’s upper range at a nominal 8 volts, powered by a home-brew 8V regulator, using a 7808 1A regulator in a TO-220 package.

Seen here, before being enclosed in heat shrink, with JST i/p & o/p connectors: Bog standard 78xx regulator configuration with the usual 10uF and 100nF capacitors on both the input & output side (some obscured, but on the other side).   Small SMD parts allow soldering right on the TO-220 regulator package pins. Intermittent servo peak current requirements are less than 400mA, so the 1A regulator is fine without a heat sink.

Being a programmable digital servo, the USB programming adapter was also obtained to play with, and is less than $10. A simple (but light weight) bearing consisting of nylon washers (actually, TO-3 insulating washers) and M3 hardware is used: Various holes for the 1/4″ bolt are drilled along the mounting rail, which allows for offsetting the camera: It looks a bit odd, but for testing purposes, the (relatively tiny) FPV video camera was temporarily mounted, so that the in-flight operation could be easily monitored: This tilt mechanism only weights 110g, half of which is the heavy duty servo.

This mount works well with an old dinosaur Nikon Coolpix 8400 camera (483 grams) mounted on it, being heavier than the camera that will be ultimately used. A few observers at the Wacol flying field: