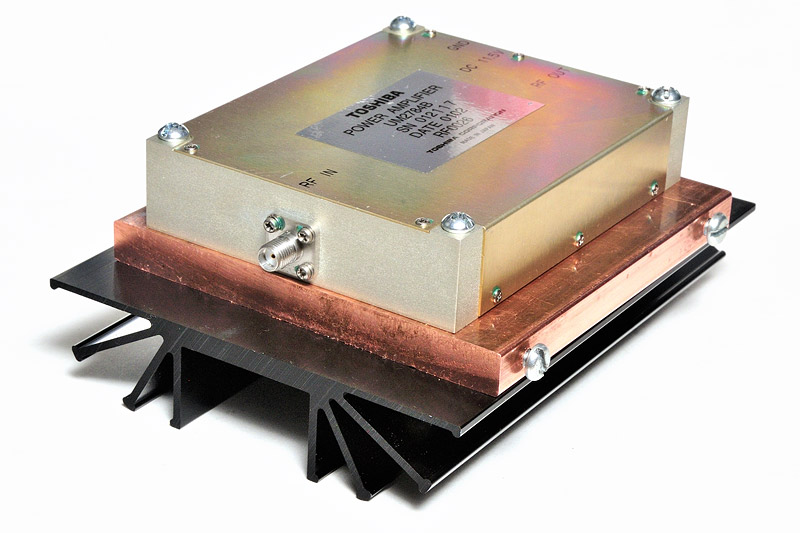 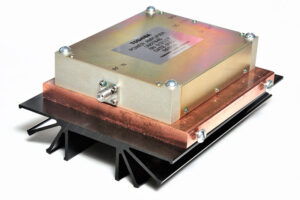 The dual-band 2.4/3.4 GHz transverter system currently runs a Toshiba UM2784B Power Amplifier on 3.4 GHz, nominally 8 watts output, as seen on the right, mounted on a slab of copper with a heatsink. This unit is being removed.

A larger and more powerful Toshiba UM2683B 3.4 GHz PA module was recently obtained, and to make room for this inside, the ThunderBolt GPSDO must be re-located out into it’s own box.

For the 3.4 GHz enthusiast, the UM2683B PA module is a no-brainer!
They’re relatively cheap, available, and whilst they provide a nominal 20 watts out, a simple bias modification allows outputs in excess of 50 watts!

Learn more about the Toshiba UM2683B obtained off eBay in a previous article.

So, the Thunderbolt GPSDO, it’s associated Display unit and switches were removed from the 2.4/3.4 GHz dual-band system. The sequencer unit will need to move as well, most likely involving wire extensions to reach some of the header connectors. Once a hole is made, the UM2683B will be mounted inside the case on a suitable heatsink arrangement. Progress will be documented here.