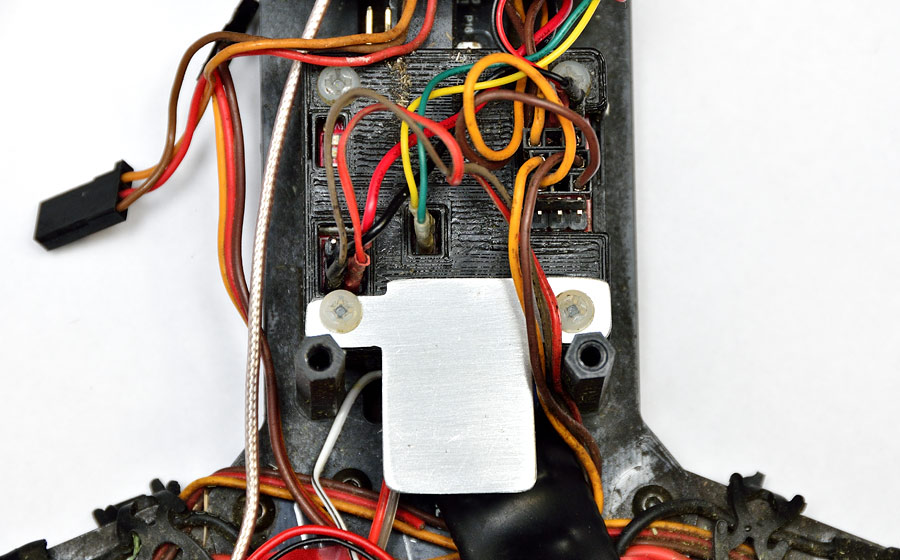 Since enclosing the Naze32 FunFly flight controller board within a 3D printed case, it’s been awkward to mount things inside the Blackout Mini H Quad because the Naze32 case mounts to the PDB, so you no longer have space under the Naze32 to play with.

Something better than a “stuffing it in” approach was needed, so a bracket like this was made up for the FrSky D4R II receiver: It’s a small piece of scrap 1.2mm aluminium, so being non-ferrous it will not affect the compass sensor.

Sharp edges (which could nick the outer sheath of wires) have been rounded off with a rub of 240 grit fine sand paper.

Held in place with the nylon M3 bolts (again, non ferrous so they don’t affect the compass sensor): We now have a firm flat surface to mount the receiver on with double-sided sticky 3mm foam: Orientating the FrSky D4R II receiver like this, and we can avoid the RX/TX port and the ESC output ports: Receiver is used in CPPM mode, which means only port 1 is used and this requires the jumper between ports 3 and 4 (as seen above).

There is clearance underneath so the LiPo battery strap doesn’t get caught up, when adjusting the position of the straps for different length LiPos (ie; 1300mAh > 1500mAh > 1800mAh): Plenty of room either side of the FrSky D4R II receiver to run wires between it and the posts: To the left of the Naze32, you will see the piezo buzzer and Bluetooth adapter as described in this article.

Receiver antennas are run around the rear posts and up through the top deck and supported by cable ties and heatshrink: Since that photo was taken, I am now enclosing the antenna wires within spent pen tubes, and heatshrinking them to the cable ties as seen above. This offers even more protection from propeller nicks.

Removing the residual ink out of pen tube inner can be messy, but some IPA cleaner and tissues does the job.