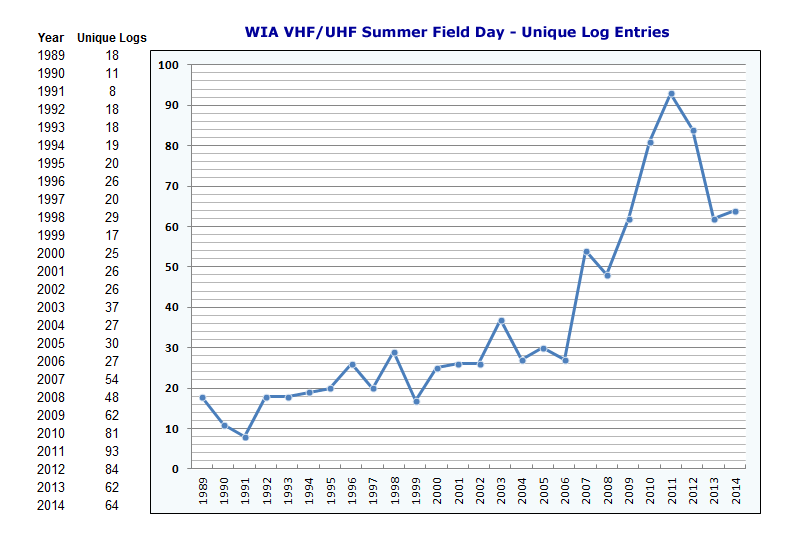 Results for the WIA VHF/UHF Field Day Summer 2014 contest have just been released.

I was amused (it doesn’t take much) to note that the Contest Manager did not quote the number of logs received, as in recent years.

To satisfy my curiosity, the official summary published as PDF on the WIA web site, was used to determine this.

It’s a rather simple process.

Why just look at 2014 in isolation, when we can go back to the beginning.

After sorting the data, removing duplicate callsigns, something interesting was revealed.
The published “number of logs received” has been misrepresented.

However, the published “number of logs received” number is artificially higher than actual, and most likely includes extracts from the “one” log, for submission into various categories.

Just because a log covering 24-hours can be broken down into umpteen various categories, does not mean more logs are submitted, and is misleading.

From the graph, it’s a safe bet that the rising interest seen last decade is now falling away.
Perhaps interest begins to wane after 5-6 years of doing the same old, same old?

If this weren’t true, we should see a high level of activity, each and every time.
But we don’t.

Adapting, creating new challenges and ultimately keeping things interesting should receive more attention by the WIA decision makers, but they fail miserably with this, not wanting to upset an aging demographic set in their ways.

The WIA VHF/UHF Field Day has been running since 1989, 25 years now, and essentially the same format.

Whilst people make endless excuses why they can’t/don’t/won’t participate, the bottom line is, they are obviously not excited enough to put much effort, if any, into it. Not only that, the taboo subject of “age” creeps in.

People need to be physically fit and able to go out portable, and none of us are getting any younger.

Ask yourself:
How many of the current operators do you honestly believe will be capable of going out portable in 2030?

Want portable stations to work in the future?

This is not rocket science!

Back in the 1990’s VHF/UHF activity was nothing to get excited about, as there was very little of it.

In those days you probably used a telephone, (which had a cord on the handset!), to help co-ordinate limited areas of activity amongst an existing list of known phone numbers. 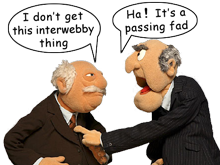 But looking at the graph, something extraordinary happened in the mid/late naughties.

An explosion of VHF/UHF activity is reflected in the Field Day participation numbers.

Something to do with computers and the interwebs thing?
In other words: embracing new things.

Hopefully hams might finally wake up to the fact that adapting to an ever changing world is not only important, but essential for survival.