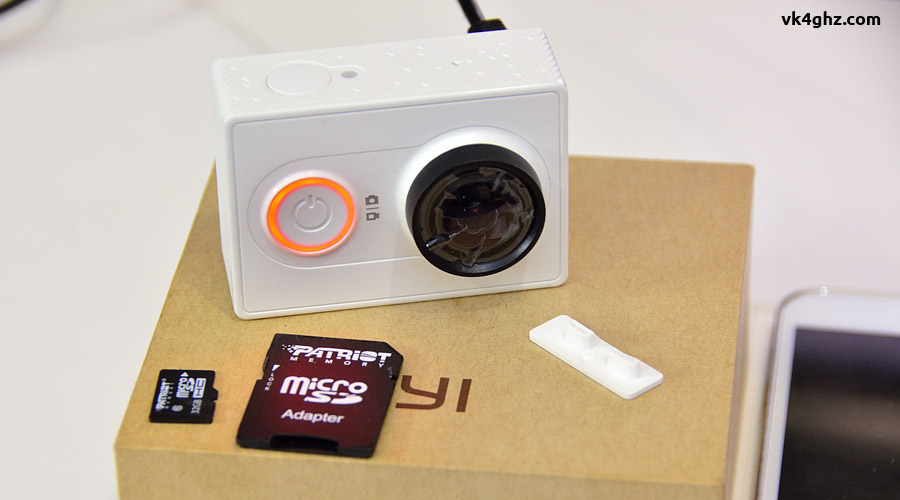 If you ordered a Xiaomi Yi action camera in early April, chances are it’s loaded with firmware v0.7.10. With the Xiaomi Yi arriving (April 24 2015) from SurveilZone, and the battery charged, it was time to have a play with the Android app that was downloaded from here.   (The v1.3.13 apk file is 26Mb)

You can ascertain the firmware version by connecting to the Xiaomi Yi via WiFi and going into the settings page.

Next to the current firmware version is a notification that an update is available.

Now, minutes before I stumbled across this website that provided a link to download firmware v1.0.9 from here.
As per the instructions, the zip file was downloaded and the bin file was copied across to the microSD card.

Oops, had I forgotten to put the card in back in?   Yep.

Camera powered off again, and the microSD card was inserted… powered up again, and reconnect via WiFi.

Now in my haste, this is where the actual update process became unclear!

Whilst the bin file was on the card, the update process appeared to be an OTA (Over The Air) update, and took about two minutes to complete.   (The bin file is 47Mb)

Once the update has completed, you are presented with this:

It wasn’t entirely apparent where the updated bin file was coming from, the card, or over the air… but I wasn’t expecting an OTA update.
If you go to update your camera, try it without downloading and copying the bin file to the card first.
You could save a bit of mucking around.

Once again, going into settings, we can verify the firmware version.

One feature now available with v1.0.9 is the live AV out.

The AV lead can be purchased from http://www.geekbuying.com/item/SJ4000-Waterproof-Sport-Camera-USB-to-AV-Output-Cable-For-FPV-330412.html

Some of the FPV multi-rotor crowd out there will be quick to point out the obvious issue of ‘latency’, if you are contemplating using a camera like this as an FPV camera.

Yes, they have latency – yes we already know this!

Whilst you wouldn’t use this live AV out as an FPV camera on a fast moving racer quadcopter, the live video out might be useful for other applications.

Did I help you?