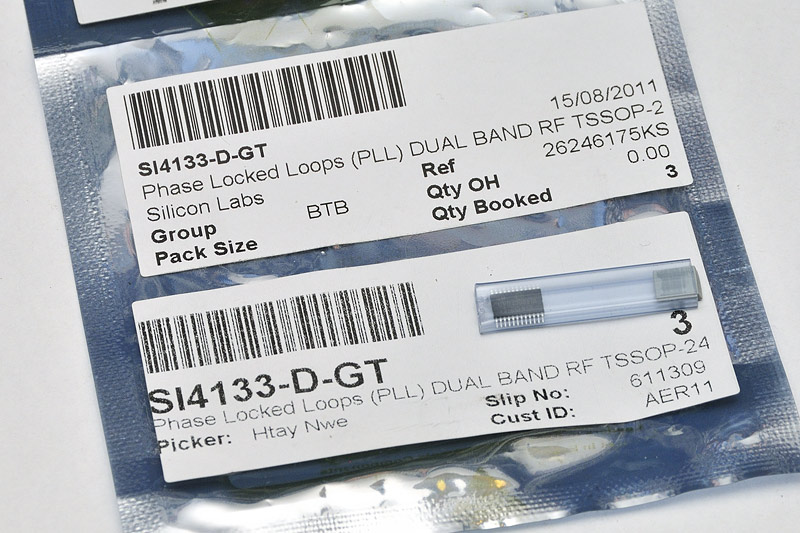 One thing that became apparent when using a single XDK PLL board in a dual-band 2.4/3.4 GHz transverter system, is that the PLL’s limitation on producing even MHz only, necessitates using different IFs.

In the heat of the moment I can see myself forgetting to change the FT-817’s operating frequency to accommodate this requirement! 😕
To try and make it idiot proof, I decided on replacing the Si4133G PLL chip, with an Si4133D chip.

The “D” variant has a programmable Reference divider, whereas the “G’s” R divider is fixed at “65”.
So the “D” is a lot more versatile.

The Si4133D (also known as Si4133-GT, just to confuse us) has a programmable R divider, and becomes more versatile.

The Si4133D PLL chips were purchased from X-On Electronics, based in Perth.
If this is the first time you are ordering from X-On, you will need to register an account on their web site.
This is quick and easy.

Searching for the Si4133, we are presented with a few options.
Not clear what the story was here, I telephoned their sales dept, and was told that some have an MOQ of 50pcs (now it becomes obvious!), and the difference with the other two listings comes down to supplier. These SSOP24 packages are small, so unless you have a capable SMD rework station at your disposal, and know how to use it, I would enlist the help of somebody who does!

I’d like to thank Graeme, VK4FI, for fitting the new chips to my PLL boards.
It’s amazing what favors can be done for a bottle of decent Merlot. 😉

Now with an Si4133D we are not limited to even MHz steps anymore.
Yay!

One other benefit with a “D”, and not being stuck with relatively small 153.846 kHz steps, is a potential improvement with Phase Noise.

We immediately see a close-in improvement with Phase Noise by around 10dB.
(I cannot explain why I saw a relative rise around 100 kHz, and maybe due to a quirk of this particular spectrum analyzer?)
This plot was generated by the [url=http://www.thegleam.com/ke5fx/gpib/readme.htm]KE5FX GPIB Toolkit[/url], a useful (and free!) collection of windows-based spectrum analyzer applications for GPIB equipped instruments.

As expected, the Phase Noise starts to get rather poor with a small PD frequency of 10 kHz.

The version of PICAXE code I am using for the Si4133D is attached below.
This is an adaptation of the v0.3 code from Dave, VK3HZ.

I found that the PICAXE 14M does not have enough memory, so three of the EEPROM frequency listings had to go from the table.
So there is only room for 13 frequencies, not 16.
(Like this, there are only 3 spare bytes left in the 14M!)
Realistically, this should be ample for even a 5-band transverter system sharing the same PLL!

The 14M2 chip has much more memory, and would accommodate the full table of 16 frequencies.
(For an M2 part, the I/O pin coding would need changing, as the M2 parts use the PORT.BIT format when referring to pins.)

Seeing as the highest addressable DIP switch position could vary depending on whether you use a 14M or a 14M2, I have used memory address #0 for the programmable IF frequency.
ie; the first slot.

This can remain constant, even if you do upgrade to a 14M2 part, and add the three extra EEPROM frequencies to the end of the table, otherwise you will need to change the table pointer to the IF frequency in line 259.