Grafting a Fluke Tilt Bail onto a HP 5315A 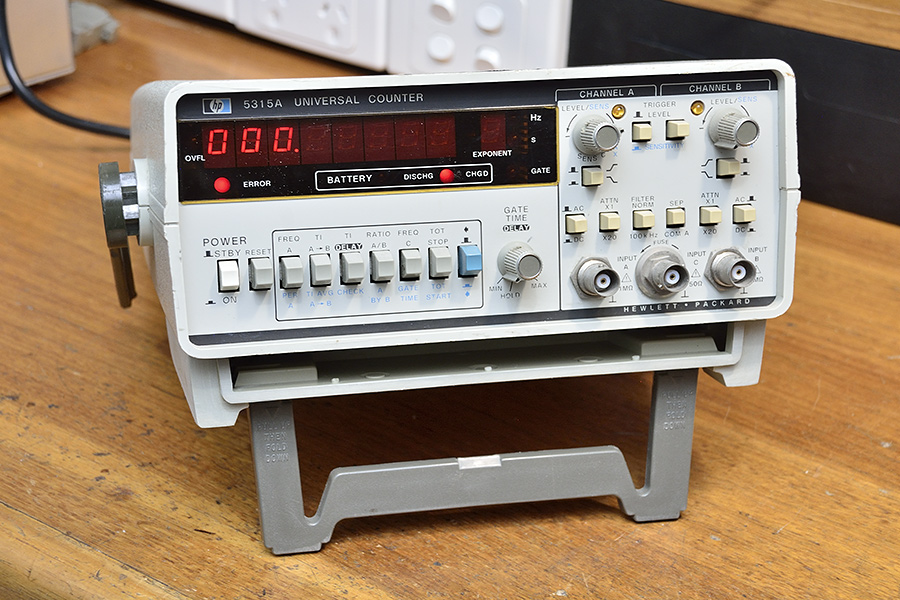 The tilt bail on a HP 5315A Universal Counter is broken and spare parts are nigh impossible to obtain.

An old Fluke 7220A Frequency Counter which was beyond repair and about to be chucked in the bin, but hang on a minute… Hmmm… could the Fluke’s tilt bail be grafted onto the HP’s enclosure? The short answer is yes, easy, as you will see.

Only basic tools are required; hacksaw, sandpaper, side cutters, a “Dremel” tool and drill & M3.5 bit

The section with the tilt bail mechanism was removed from the rest of the bottom enclosure part. This was very much a “suck it, and see” process with regards to cutting and trimming the plastic.

It worked better if ~3mm were removed from the top face, and conveniently, this is where the lip was. This was easy using a pair old side cutters, you know, the side cutters that are too worn for a nice clean cut, but ok for rough stuff. The rough cut edge was then cleaned up smooth by rubbing the plastic against a sheet of sandpaper. Back to the HP 5315 Counter, and these two front “feet” were removed with a Dremel type tool. This then made a flat mounting surface. Both sides were also cut & sanded to provide a slope when sitting on the bench without the tilt bail extended. Four 3.5mm mounting holes were then drilled on the tilt bail and bottom of the counter.

3.5mm allows for a bit of adjustment when using M3 bolts! This mounting point means the washers and nuts are well out of the way here. Will not win any beauty contests, but is very functional. And when the tilt bail is retracted. I just need to remove the original tilt bail pieces and will then need to find something to cover the two holes.