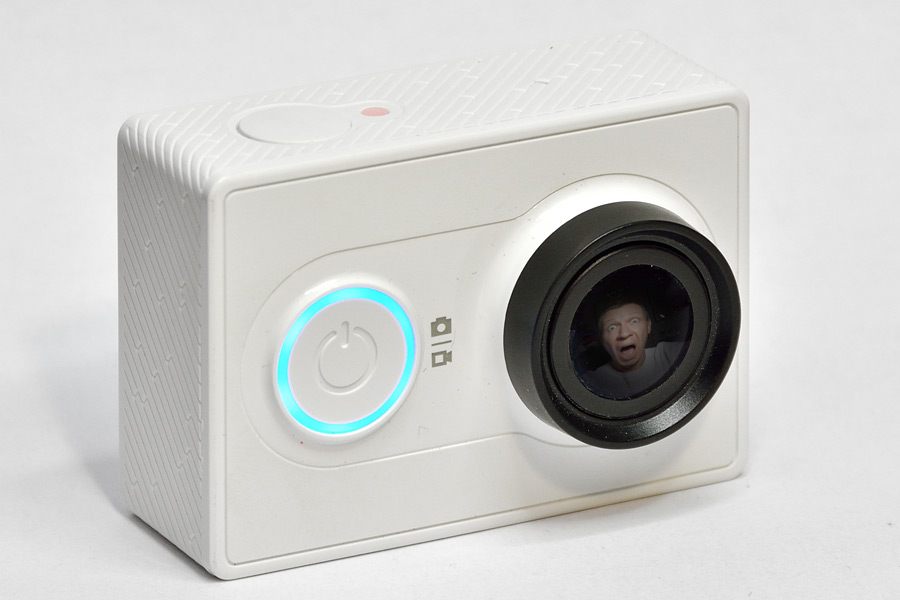 It appears to be a common problem – the Xiaomi Yi action camera’s lens has been incorrectly preset in the factory.

I’m guessing the Chinese assembly workers set the focus on something no further than ~ 50cm within their own workstation space.
The focus should be set on something much further away.

This is easy to rectify, once you have cracked the case open, which is held together with clips as seen here: I used a combination of fingernail, two small flat blade screw drivers and a Stanley knife blade to run around the perimeter and lever off the front face. Be careful not to break the front face when trying to lever it off.
Don’t you love it when somebody mentions the bloody obvious! 😉
You will find 3/4 of it comes off relatively easy, with the difficult side being on the WiFi button & LED side.

With the front face removed you will discover the lens is glued in position in two or three locations around its perimeter.
A Stanley knife was used to scrape away the glue.

This image shows how much the lens was rotated by to achieve best focus at infinity. To set focus I recommend you view it at the highest quality possible, so this means taking the HDMI out and feeding that into a suitable monitor.   Don’t even think about trying to set it via the low-res version seen on the mobile app.

Also, use the mobile app to turn off the ‘Lens rectification’ if you have it on.
This feature digitally zooms up the edges to correct for lens distortions.
It’s easier to see focus tweaks without any pixel manipulation going on.

Once set, use a few small drops of superglue to hold in place, let that dry, and refit front face.