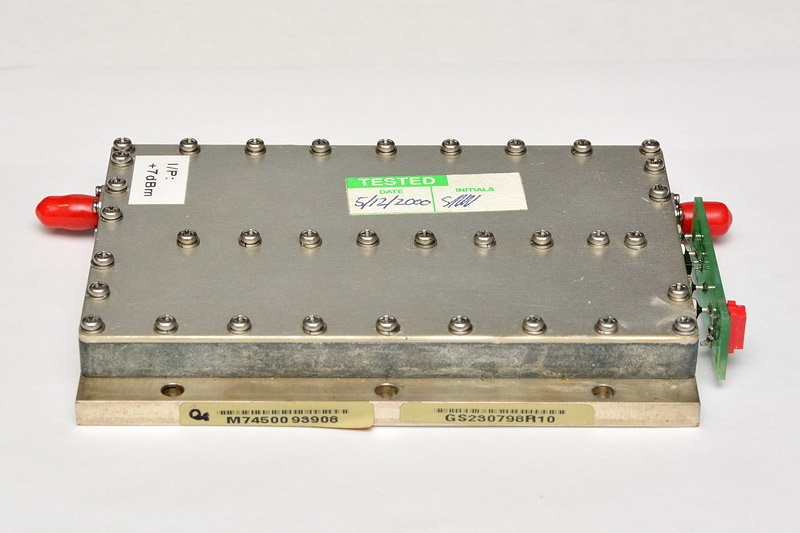 This 5.7 GHz Power Amplifier originated from the Wellington VHF Group some years ago, and the information below is a compilation of information posted on the VK Logger Discussion Forum. 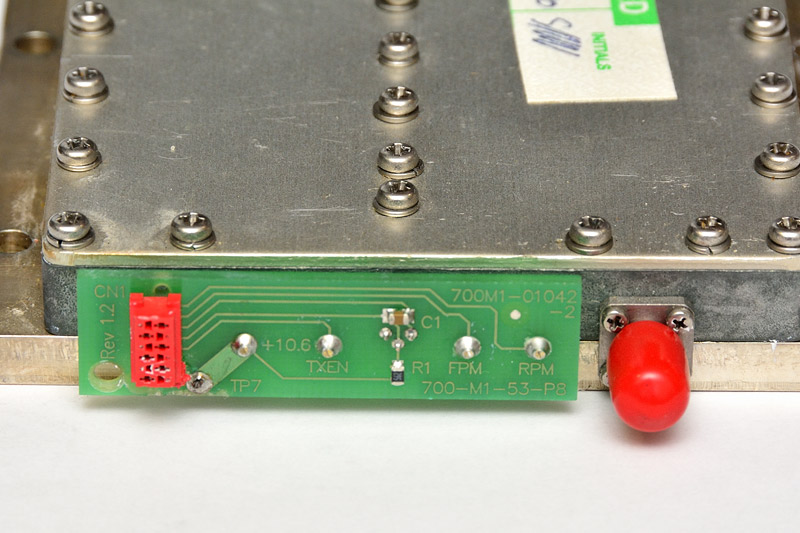 You will note from the Yellow curve, the increase in output was negligible but certainly had an effect on the overall gain/bandwidth compared with the as supplied response.
It may not be worth the trouble to take the lid off this amplifier before using.

Information from G8ACE
Test conditions (saturated output mode):
10mW constant level drive over the test frequencies from sweeper in manual mode.
Heat sink slightly larger than the PA and with fins, about 3/4″ thick with a PC type Cooling fan 12v 200mA.
It’s much better for devices to keep them cool rather than seeing what you can get away with.
Also, the FPM (forward power monitor) produced circa 3V into 1K for about 5W out.
The semiconductor embedded in the case behind the PCB is an LM335 temperature sensor IC which gives an output of 10mV/Kelvin relative to absolute temperature so it’s quite easy to use this to monitor the case temperature. It’s fed via 5.6k from the +10.6V line but its bottom end is floating.
Expect 2.9V across it @ 17 degrees C, which is correct.

Snow Flaking information from ZL1TPH
With a snow flake tab just past the C on the out of the FET, power output increased from ~ 5 Watts @ at 5.76 GHz to around 7 Watts @ 5.76 GHz.
Less output now at 7 GHz etc.
Once this information was circulated around, the price of these amps increased to $80 NZ and is still cheap considering. KISS, dead bug style.
Not wired up to PA when this image was taken, but tested/adjusted for 10.6V before screwing down onto 1/4″ copper plate heat sink.
Obscured by the trimpot, but there is a solder lug going to ground (via the M3 screw into the copper) where the two tantalums and trimpot connect.
I cut a TO3 mica washer to suit this package, as the rear tab is connected to Vout.

I powered up the WGPA (Wellington Group PA – for the sake of a name!) for the first time. About 10 minutes to do, and a 21% increase in output power.
Most of that is taken up by unscrewing the 35 screws, and screwing them back up again.
DC current increases by about 200mA or so.
This must be the easiest power output mod, ever!

Worthwhile doing, for anyone keen to squeeze the last dBm out, and optimize their systems.